As a cybersecurity professional I get frequent questions from people who want to know how to keep their personal or business data secure.  While it is true that the tools and techniques used by hackers are getting more sophisticated, the reality is that most breaches, even the very large and highly publicized breaches, could be prevented by implementing common security measures.  The bottom line is that in most scenarios, hackers are gaining access to systems the same way they have been for years, by users making poor choices on the Internet, or clicking malicious links in email or other online messages.

Nearly all cyberattacks involve a hacker stealing the valid credentials from a user.  Often hackers accomplish this by social engineering, a fancy way of saying they trick a user into giving up secret information like usernames and passwords.  Since most users reuse the same password or a slight variation of the same password among different computers and applications, hackers can begin to move rapidly and access a user’s data.  For instance, if a hacker tricks a user into clicking a link within an email and ultimately harvests the user’s email password, the hacker will logon to the user’s email. Once in the user’s email account, the hacker will begin reconnaissance to see what other information is in the email box such as emails from banks, employers, cloud storage providers, healthcare websites, social media sites, and more.  The hacker will then begin using the password obtained for the user’s email on all of the other sites and generally with a high degree of success.

Every person uses MFA when they use a debit card.  When a customer presents a debit card at a business and then enters a PIN to complete a purchase, they have just provided something the have (the card) and something they know (the PIN).  Usually, the MFA categories include items such as:

By implementing MFA it immediately protects a user against brute force attacks and social engineering.  Even if a hacker obtains a user’s password through some means, unless the hacker has the second component of MFA, they still cannot access the user’s data.  For individuals, MFA is usually accomplished by either the user receiving a text message with a one-time password, or through the use of some third-party application.  When a user attempts to logon to a website or application, the user is prompted for their username, password, and the one-time password. 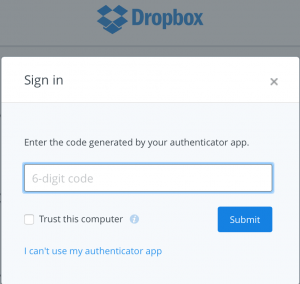 The above screenshot shows a logon attempt to the website Dropbox.  I have enabled two-factor authentication for my Dropbox account, which requires me to supply my username, password, and the six-digit one-time password from my smartphone app. 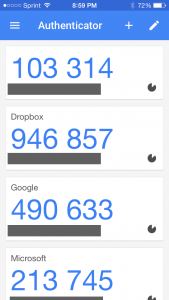 The above screenshot shows an example of the Google Authenticator app.  When the app is opened, the user simply enters the digits displayed for authentication.  This is known as a one-time password because the password changes at a regular interval.

Many websites and services offer MFA whether it is via text messaging (also known as short message service or SMS), or an app like the Google Authenticator.  For a great resource on what websites are offering MFA, check out Two Factor Auth. Several websites have their own MFA such as Apple iCloud, Twitter, and Facebook.  Had Apple implemented MFA and celebrities taken advantage of it, the nude photos that were leaked in 2014 when hackers used a flaw that allowed them to brute force iCloud accounts would have been prevented. 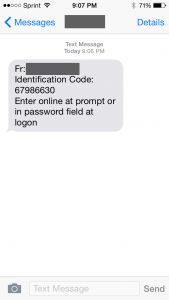 There are many password management tools available, some are cloud-based and others are local applications installed on a computer. Both have their pros and cons with LastPass being very popular for cloud-based and KeePass for local installations. My personal preference is to install the database locally so my passwords aren’t completely stored in the cloud and vulnerable to hackers such as in the 2015 Last Pass attack.  A local application such as KeePass is a little less convenient, but there are ways to make it more useful, such as installing the iOS or Android app and having the passwords available on a (hopefully encrypted) smartphone. 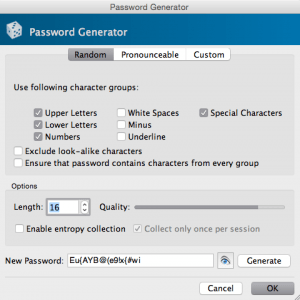 The above screenshot is of the Mac version of KeePass, known as KeePassX and the password generator tool builtin to the application.

As with any security-related tool there is a trade-off between convenience and security.  MFA does take an extra minute and requires the possession of a cell phone, but the peace of mind it provides is well worth the extra step.

2 thoughts on “Why Multifactor Authentication is so Important”