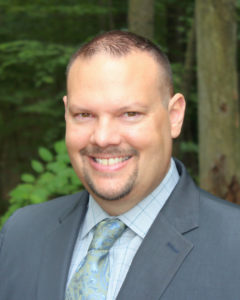 Josh Moulin has more than 16 years of information technology and cybersecurity experience and serves as a trusted advisor to U.S. federal government CIOs, CISOs, and other IT executives. Moulin provides his clients direct trusted counsel to shape organizational strategy, establish executive communications and leadership, drive innovation, maintain information security and assurance, and leverage research and resources.

Previously, Moulin was the CIO/CISO for the U.S. Department of Energy, National Nuclear Security Administration, Nevada National Security Site (NNSS); a 1360 square mile highly secure area outside of Las Vegas, NV. The NNSS provides arms control, emergency response, counterterrorism, weapons testing, nuclear nonproliferation, nuclear stockpile stewardship, and special technology development among other national security significant missions. As the CIO/CISO, Josh was the recognized expert and authority on policies, procedures, guidance, and technologies impacting the agency.  Josh established the direction of the information technology and cybersecurity policy and strategy to include management practices, budget priorities, and overseeing technology-related implementation. He was responsible for protecting the contractor’s corporate, United States Government, and employee and customer data from compromise by developing a security program that inhibited, detected, and responded to threats.  Moulin oversaw classified and unclassified systems and networks, approximately 140 employees, and an IT/Cyber budget of over $30M.

Moulin started his IT career while in law enforcement during the inception of social networking and e-commerce. Moulin realized law enforcement was ill-equipped to investigate cybercrimes and as a result, he built what eventually became a regional FBI cybercrimes task force and accredited digital forensics laboratory. As a police lieutenant, Moulin commanded the task force along with the crime analysis unit and served as the city’s IT director. Moulin successfully investigated hundreds of cybercrimes including intrusions, white-collar crime, violent crimes, and child exploitation.

Moulin maintains an active Top Secret clearance, holds a Master’s Degree in Information Security and Assurance and is a graduate of several leadership development programs both from law enforcement and the federal government.

Moulin has been recognized as a national expert in the field of information technology, digital forensics, and cybersecurity.  He is frequently used as a technical expert by authors and has been featured in several books and has testified as an expert witness in both state and federal court on several occasions.

Most important to Moulin is his family and his faith. He has been married for 20 years to his best friend and they have two beautiful daughters.

For further information on Josh’s training and experience, please download his CV below:

Josh is a "Lethal Forensicator", and awarded the above coin by SANS. According to SANS, a Lethal Forensicator is, "awarded to those who demonstrate exceptional talent, contributions, or helps to lead in the digital forensics profession and community. The Coin is meant to be an honor to receive it; it is also intended to be rare. Those who join the Lethal Forensicators Unit will have all privileges and recognition.

These lethal forensicators who earn the Coin can detect and eradicate advanced threats in their organizations. Those that hold the coin have been properly trained incident responders or investigators and might be the only defense your organization has left in place during a compromise or a complex digital investigation. These analysts know what they are up against and continually strive to further not only their knowledge, but also the knowledge of the entire digital forensics field. They actively share their experience and encourage learning through participation in the community. They stay ahead by constantly seeking new knowledge and experience. Often, they are the leaders in the digital forensics and incident response community.

Special recognition has been created for those that have exhibited the qualities described above. We need something that recognizes leadership, talent, and expertise in the digital forensics field. The SANS Institute Lethal Forensicator Coin is one way the SANS Institute recognizes those in the field that deserve special recognition and a thank you for their continued efforts."